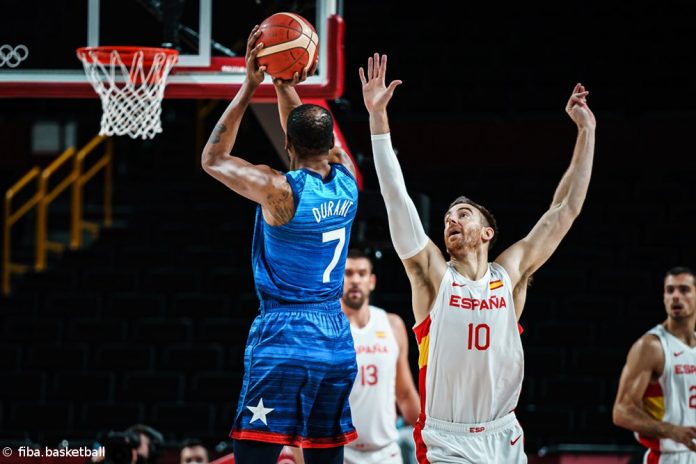 TOKYO (Japan) – The United States bounced back from their opening day defeat to France and went on to win their fourth consecutive gold. Kevin Durant was the main reason why and is justly rewarded as the MVP of the Men’s Olympic Basketball Tournament at Tokyo 2020.

The 32-year-old forward started the event with two 10-point games, but then the player that goes by the moniker Easy Money Sniper just switched through gears for the rest of the Olympics. Durant had 23 points on 8-of-11 shooting, with 8 rebounds and 6 assists against the Czech Republic in the last game of the Group Stage, leading the team in a must-win situation.

He took over in the elimination phase of the competition. Against Spain in the Quarter-Finals, the superstar had 29 points in 31 minutes of work, leading the charge to erase a double-digit deficit and book another trip to the Semi-Finals.

Australia were up by 15 in that one, until Durant took matters into his own hands. KD collected 23 points and 9 rebounds, with 2 assists, 2 steals and a block, good enough for a comfortable 97-78 win after the USA were down 41-26 late in the first half.

In the Final, France gave the United States all they had, but it was impossible to stop the Brooklyn Nets star. Durant had 21 points by halftime, finished with 29, including the game-winning free throws that made it 87-82 with eight seconds remaining on the game clock.

„Kevin Durant is amazing. You put a big on him, he’s able to drive. You put a small guy on him and he’s able to shoot over him. All my teammates did their best, but it is really difficult,“ France’s guard Nando De Colo said after the Final.

The MVP now has a total of 89 points over the last three Olympic Finals. He still holds the record for the most points in a single Final game with 30, a mark he set in 2012 and 2016, tying compatriot Adrian Dantley’s 30-point record originally set in 1976.

A three-time gold medal winner, Durant was in no mood for comparisons.

„I hate to compare stuff because everything has its own moment. But this is one of those special journeys that is hard to describe. Each and every one of us put in that work every single day. From the coaches, to the trainers, to the players. We all came in with that goal of let’s finish this thing off, let’s build a family, let’s build and grow this team every single day. Each game we continued to grow. It was just that journey which was so important.

You finish the job, you get the gold medal and the trophy, but when you go through that journey it is just incredible to be part of something so special,“ Durant added. „I am bonded with these guys for life and I am just glad that we all committed to this thing so early, stuck with it and finished it off.“

Durant is already the leading scorer of the men’s section of Team USA in Olympic history. In three years‘ time, he will be 35, so don’t rule him out of the Paris 2024 Olympics, especially because he knows what it feels like to play for the United States.

„We usually get the best players on this team. To build a camaraderie with the most talented guys in the world, to fight for your country – it’s special that we come together for a common cause because we battle against each other all year,“ Durant said. „We fight so hard to get the gold bar in the NBA, but for us to rise above that and become teammates and brothers for life against the rest of the world is such a huge, huge deal. I am always grateful for the opportunity. It’s just that brotherhood that we create that I am proud to be a part of. It brings me a lot of joy.“

Durant finished the Games  averaging 20.7 points, 5.3 rebounds and 3.7 assists per game to headline our All-Star Five from the Tokyo 2020 tournament.